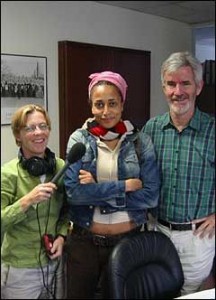 We like to call Open Source an American conversation with global attitude, and now with a weekly show on WBUR radio, we’ll add some Boston flavors as well. Drawing on our roots here, we’ll remind you why Boston has been the capital of ideas in America since the heyday of Emerson and Thoreau in the 1840’s.

Submit a photo for the banner spot on our site.  Horizontal ones work best. Send us a snapshot of your favorite Boston haunt or a Hub scene of yore.  We’ll give you full credit, which will lead to marvelous things.

Christopher Lydon
Christopher Lydon covered politics for the New York Times from the Washington bureau in the 1970’s. He hosted the Ten O’Clock news on WGBH TV through the 1980’s. ideas. He co- founded and hosted the Connection on WBUR in the 90’s. With Dave Winer he recorded the original podcast in 2003. The rest is history in the making.

Mary McGrath
Mary McGrath began her career in public television in New York in the 80’s. She met Chris Lydon in 1993 at Charlie’s Sandwich Shop on Columbus Ave in the South End where they hatched “The Connection” and a 20 year long adventure and partnership. More to come.

Kunal Jasty
Kunal Jasty joined Radio Open Source this past December after four months of traveling in South America, Asia and Africa. Originally from Weston, Massachusetts, he is currently on leave from Columbia University, where he studies computer science and listens to hours of public radio. In New York, he likes to spend his time programming for 89.9 WKCR, exploring new neighborhoods, searching for used books, and endeavoring to write short fiction.